The history of the building

Palace of the Aguirre family

Between Santa Maria and the present Fray Zacarias Martinez streets, at the highest ponit of the city, Licenciado Hortuño Ibañez de Aguirre commissioned the construction of this building around 1520 for use as a convent by Dominican nuns. It seems that when the building was completed around 1522, licenciado Aguirre converted it into a family residence.

In 1714, Maria Antonia de Salcedo was granted a noble title of Marquess of Montehermoso, and this led to the new name of the Palacio Aguirre as Palacio Montehermoso.

In 1862 the palace was rented out as the Bishop's Palace for the new diocese that had been created. However, with the start of the Carlist War in 1873 the military authorities decreed the occupancy of the palace and turning it into a temporary barracks.

The restoration of the palace in 1887

In 1887 the Marquess of Amparo sold the palace and it's grounds to the bishop. The bishop comissioned the restoration work to Fausto Iñiguez de Betolaza, an architect from Vitoria.

The restoration of the palace of Montehermoso carried out by Iñiguez de Betolaza was extensive. The first striking point is the change of place of the main facade of the building, moving the new entrance to Fray Zacarias Martinez street, at the time called Seminario street.

In the last third of the XIX century the need to provide the city of Vitoria with more water led to a series of actions and measures, among them the construction in 1885 the Water Tank at the highest point in the city in el Campillo, right opposite the old palace of Montehermoso.

101 years later, the old storage tank was no longer useful and was closed. After it first restoration it opened its doors in 1991, transformed into an exhibition area with the aim of promoting the cultural life of the Old Quarter of Vitoria.

The palace of Montehermoso. Francisca Vives, 2008 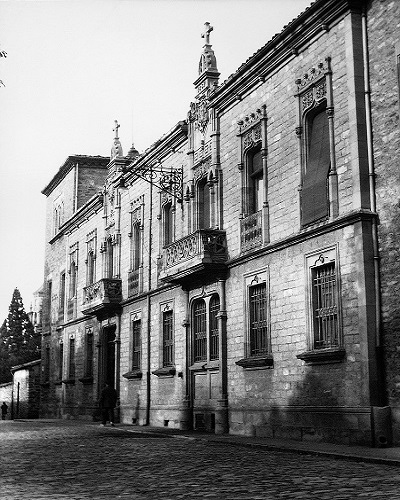